I grew up in Sweden, a country with a well functioning socialdemocracy from the 50ties until the end of the 80ties. The economy was on top and the political system was build on distributing the incomes of the country to all citizens.
Unions got powerful and created rules that benefited the employees, so they got better working-conditions and higher salaries.

Schools got better. Children with learningproblems got special lessons. Children with parents speaking a foreign language got lessons in their mother tounge as well as in swedish, so they could benefit from being bi-lingual.

In every school I went to as a child, and at every work I had after, there was always a VILRUM.
RESTING PLACE would be the best english translation as the word restroom lead your thoughts to an american toilet.

The resting place was simply a small room with a wash-hand basin, a bed, a pillow and a blanket. A very important thing was the key, so you could lock the door and be sure not to be disturbed.

At school your teacher would get the key for you. At a place of work you would get it at the reception or from the housekeeper, or it would simply be sitting on the inside of the door. Typical reasons for spending a few hours in the resting place would be aches of the first day of period or a headache that made you need a aspirin and some rest, before returning to work.

In 1992 I moved to Germany and then to Denmark. As I got back to Sweden eight years later I realized that the swedish welfare I grew up with, was gone. A welfare I had been very proud of, especially around friends in Germany, where actually the former East- Germans saw Sweden as ”ein Musterland” – the word Erich Honecker used for Sweden.

In the year of 2000 the socialdemocracy was clearly on the right side of politics. It had happened little by little, but for someone who hadn’t really followed swedish politics for eight years, it was a huge turn. The social-democratic programme now, was more or less the same as that of Moderaterna (the major right-party), ten years ago.

Industries had had problems since the end of the eightees, and companies chose to move abroad to get cheaper workingpower and to pay less taxes. Unemployment followed and people who still had jobs were afraid of loosing them. The unions tried to hold on to their power, but lost it little by little. The social security system got weakened, and you couldn’t rely on getting unemployment-money or other benefits. Homeless people was part of the picture in almost every city.

All this has led to a growing competition at the labour market, also connected to a speeding change of technology where you always have to be up-front and learn the latest computer- programs etc.

The words “burned-out” as a term of an illness, popped up in the late nineties, with big head- lines in the media. But pretty soon the discussions faded. This term of a new illness had become part of a common vocabulary.

The first job I had when I got back to Sweden was in a big office, built in the 60:ies. As I walked around the building, I saw a door with the familiar sign VILRUM.

I opened the door and found it transformed into a storage room for toilet paper and cleaning materials.

This was such a strong picture of how efficiency has won over humanity in the labour market. There was no space for taking a break in that market anymore.

If you got a headache at work you took an aspirin and stayed quiet about it.
You’d better not let anyone know of your weaknesses.

It was so sad to see that such a short-ranged thinking was now the common practice for so many people.

From this point of view I built my first Resting place.

It ́s a shed standing free in the gallery with three dogs and one cat–each on its own videomonitor–filmed while they are sleeping. They are filmed on a cream colored carpet, the same color and texture as the one coverering the floor in the shed. This gives a feeling of being in the same room, when you rest on the matress.

I have showed my Resting place in museums and galleries in Denmark, Sweden, Norway, Germany and France.
My greatest wish has been to also install it at working sites where people would have the chance to use it ”for real”.

After a long time of research and discussions around architects and commissioners of building projects, I installed a ”Ruheraum” at Krypton, a company for research and production of wind-energy in Bremen, january 2003. 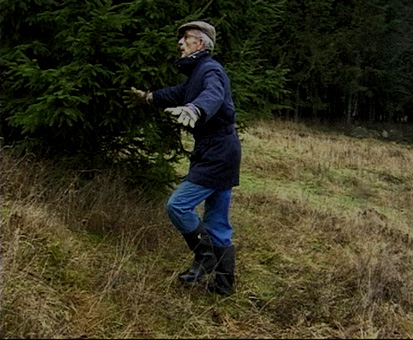 I Love You. You’re Mine.